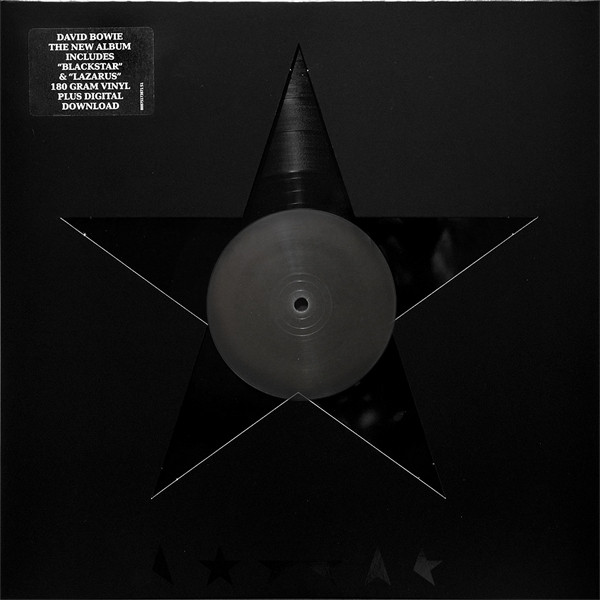 Blackstar (stylised as ★) is the twenty-fifth and final studio album by English musician David Bowie. It was released worldwide on 8 January 2016, coinciding with Bowie’s 69th birthday, through his ISO label, Columbia Records and Sony Music. The album was primarily recorded in secret between the Magic Shop and Human Worldwide Studios in New York City with Bowie’s longtime co-producer Tony Visconti and a group of local jazz musicians: saxophonist Donny McCaslin, pianist Jason Lindner, bassist Tim Lefebvre and drummer Mark Guiliana; guitarist Ben Monder joined the ensemble for the final sessions, while James Murphy of LCD Soundsystem contributed percussion. The album is more experimental than its predecessor The Next Day, combining art rock with different styles of jazz.

For the album, Bowie took inspiration from electronic groups such as Boards of Canada as well as hip hop artists such as Kendrick Lamar and Death Grips. The album contains re-recorded versions of two songs, “Sue (Or in a Season of Crime)” and “‘Tis a Pity She Was a Whore”, both of which were originally released in 2014. It was preceded by the singles “Blackstar” and “Lazarus”, both of which were supported by music videos. The album cover, designed by Jonathan Barnbrook, features a large black star with five star segments at the bottom that spell out the word “Bowie”.

Two days after its release, Bowie died of liver cancer; his illness had not been revealed to the public until then. Visconti described the album as Bowie’s intended swan song and a “parting gift” for his fans before his death. Upon release, the album was met with critical acclaim and commercial success, topping charts in a number of countries in the wake of Bowie’s death and becoming Bowie’s only album to top the US Billboard 200. The album remained at the number-one position on the UK Albums Chart for three weeks. It was the fifth best-selling album of the year, worldwide. It has since been certified Gold and Platinum in the US and the UK, respectively.

At the 59th Annual Grammy Awards, the album won awards for Best Alternative Music Album, Best Engineered Album, Non-Classical and Best Recording Package, with the title track winning for Best Rock Performance and Best Rock Song. The album was also awarded the British Album of the Year at the 2017 Brit Awards. It was listed as one of the best albums of 2016 and later the 2010s decade by numerous publications. In the years following his death, commentators have named Blackstar one of Bowie’s greatest albums, and was included in the 2018 edition of Robert Dimery’s book 1001 Albums You Must Hear Before You Die.