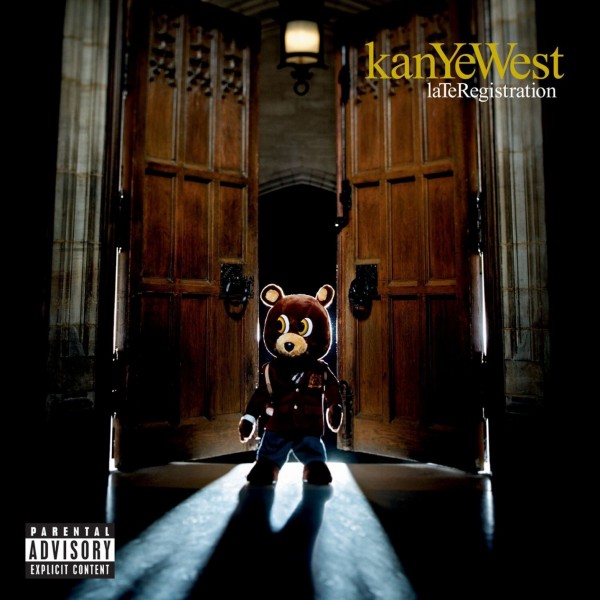 Late Registration is the second studio album by American rapper and producer Kanye West. It was released on August 30, 2005, through Def Jam Recordings and Roc-A-Fella Records. West recorded the album over the course of a year in sessions held at studios in Hollywood and New York City, in collaboration with record producer and film score composer Jon Brion. The recording sessions also featured guest contributions from Adam Levine, Jamie Foxx, Common, Brandy, Jay-Z, and Nas, among others.

West’s production for Late Registration departed from the sped-up soul samples of his debut album The College Dropout (2004) in favor of a more elaborate, orchestral, and eclectic sound. Drawing creative inspiration from alternative acts such as Fiona Apple and Portishead, he experimented with intricate sampling methods, string orchestration under Brion, and a variety of instruments not typically associated with hip hop or popular music, including celesta, harpsichord, analog synthesizers, and Chinese bells. In an effort to write authentic yet relatable lyrics, West explored both personal and broader sociopolitical concerns through storytelling devices and a persona marked by humor, enthusiasm, and lament. He also continued to examine his paradoxical relationship between Christian spiritual sense and market-capitalist freedom, resulting in topical songs that critique sources of inequality such as institutional racism, higher education, health care, drug trafficking, and the blood diamond trade.

Matching The College Dropout‘s commercial success, Late Registration debuted at number one on the US Billboard 200 and sold 860,000 copies in its first week. It eventually reached more than three million copies sold in the US and received a quadruple platinum certification from the Recording Industry Association of America (RIAA), as well as sales certifications in several other countries. Five singles were released to help market the album, including the international hits “Touch the Sky”, “Heard ‘Em Say”, and “Gold Digger”, the latter of which topped the US Billboard Hot 100. Music videos for all five singles were also produced, while West supported the album with a promotional concert tour, leading to the live album Late Orchestration in 2006.

A widespread critical success, Late Registration was viewed as a vast progression from The College Dropout and a pivotal release in hip hop. Reviewers praised its elegant and ambitious musical direction while highlighting West’s songwriting and performances for their balance of pop and conscious rap sensibilities. The album appeared on numerous year-end critics polls, being ranked as 2005’s best album in Rolling Stone, Time, and the nationwide Pazz & Jop, while earning West eight Grammy Award nominations, including for Album of the Year and a win for Best Rap Album. Its success elevated West from a successful hip hop producer to an innovative and culturally relevant recording artist in his own right. Among his most acclaimed works, Late Registration frequently appears on professional lists of top albums, including Rolling Stone‘s “500 Greatest Albums of All Time”, on which it ranked 117th in 2020.

Join Waitlist We will inform you when the product arrives back in stock. Please leave your valid email address below.
SKU: 200018 Categories: Hip Hop, New Records Tag: Rap