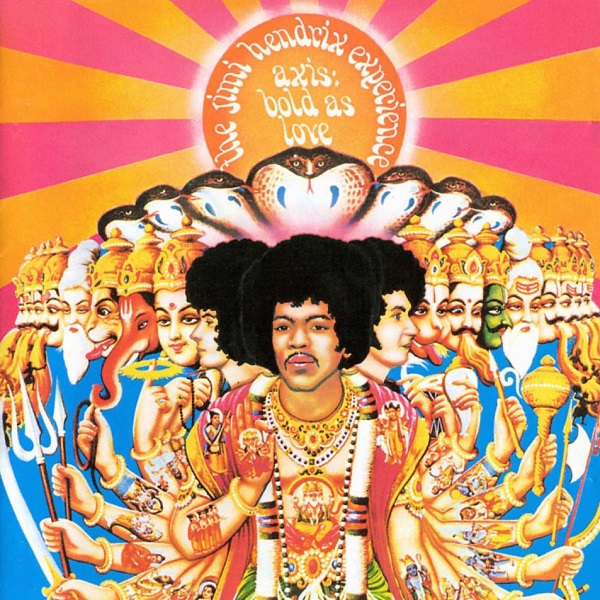 Axis: Bold as Love is the second studio album by the Jimi Hendrix Experience. Track Records first released it in the United Kingdom on December 1, 1967, only seven months after the release of the group’s highly successful debut, Are You Experienced. In the United States, Reprise Records delayed the release until the following month. The album reached the top ten in the album charts in both countries.

For the album, the group displayed several musical styles and critics saw it as demonstrating Jimi Hendrix’s growth as a songwriter. The album introduced “Spanish Castle Magic” and “Little Wing”, two Hendrix compositions which draw on his roots performing with rhythm and blues bands, that would remain in his live repertoire throughout his career.

The album cover, which draws on Hindu religious iconography, has generated controversy. It was designed without Hendrix’s approval, and he publicly expressed his dissatisfaction. However, the album went on to become quite successful and was certified platinum in the US and silver in the UK. In 2000, Axis: Bold as Love was voted number 147 in Colin Larkin’s All Time Top 1000 Albums (2000). Rolling Stone ranked Axis: Bold as Love number 92 on its 2020 list of the 500 Greatest Albums of All Time.

Join Waitlist We will inform you when the product arrives back in stock. Please leave your valid email address below.
SKU: 200135 Categories: New Records, Rock Tags: Blues Rock, Psychedelic Rock