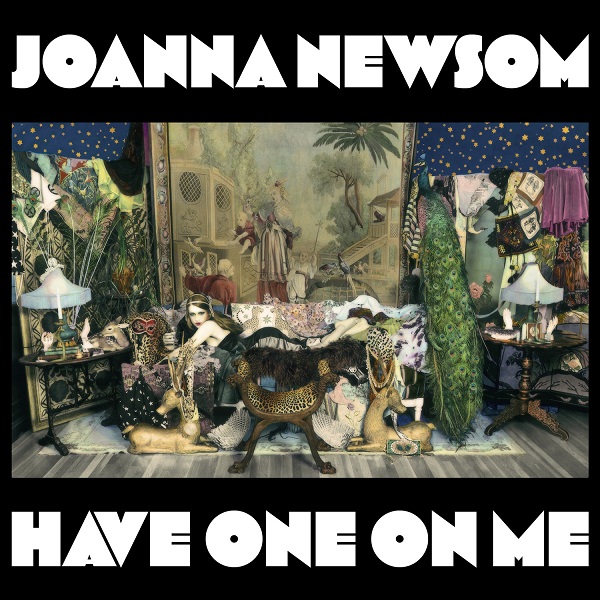 Joanna Newsome – Have One On Me (Box Set)

Have One on Me is the third studio album by American singer-songwriter Joanna Newsom, released on February 23, 2010 via Drag City as the official follow-up to the harpist’s highly acclaimed second studio release, 2006’s Ys. It is a triple album produced by herself and mixed by long-time collaborators Jim O’Rourke and Noah Georgeson, with the accompanying arrangements by Ryan Francesconi. Have One on Me continues Newsom’s use of cryptic, pastoral lyrics, with a further progression of elements of her sound such as the orchestral accompaniment and the arrangements – with the inclusion of diverse instruments like the tambura, the harpsichord and the kaval. The production also flirts with genres such as jazz and blues in some of the tracks, while adding drums and the electric guitar in others. The album is also her first since The Milk-Eyed Mender to include songs played on the piano instead of the harp. Because of health problems, Newsom’s voice was damaged during the sessions consequently affecting the overall recording process and forcing the harpist to change her singing style.

The title of the album and its official release date were officially announced on January 12, 2010, through a comic strip. Otherwise, information about Have One on Me surfaced slowly, mostly being kept secret by the press and Drag City. Advance copies of the album were only sent to music critics a few weeks before its release in an attempt to prevent a leak, since Newsom’s previous album leaked months ahead of its original release date after it was left unprotected on servers belonging to music review website Pitchfork Media. It ultimately leaked on February 18, 2010.

Have One on Me was largely acclaimed by music critics upon its release, earning Joanna Newsom several accolades and favorable comparisons to previous singer-songwriters such as Judee Sill, Joni Mitchell, Laura Nyro, Rickie Lee Jones and Kate Bush. Conversely, like her previous releases before it, the album has received its share of criticism. The majority of them were made towards its triple disc format – described by some critics as overly ambitious – and some of its tracks’ lengths. Commercially the album earned Newsom her best chart positions yet and fared well. In the U.S. Have One on Me debuted and peaked at number 75 on the Billboard 200 and number 16 on the Top Digital Albums, selling more than 7,000 copies in its first week. It also spent four consecutive weeks atop of the Folk Albums chart and peaked inside the top 10 of the Independent Albums chart. In the UK it peaked at number 28, becoming her second album to reach the top 50. Additionally, Have One on Me is her first chart appearance in Canada.