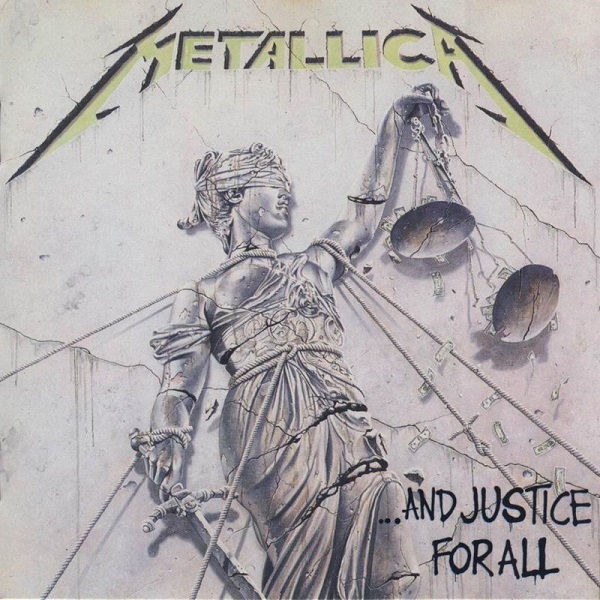 Metallica – …And Justice For All

…And Justice for All is the fourth studio album by American heavy metal band Metallica, released on September 7, 1988 by Elektra Records. It was the first Metallica album to feature bassist Jason Newsted, following the death of their previous bassist Cliff Burton in 1986.

Metallica recorded the album with producer Flemming Rasmussen over four months in early 1988 at One on One Recording Studios in Los Angeles. It features aggressive complexity, fast tempos, and few verse-chorus structures. It contains lyrical themes of political and legal injustices, such as governmental corruption, censorship, and war. The cover, designed by Roger Gorman, and illustration by Stephen Gorman was based on a concept by Metallica guitarist James Hetfield and drummer Lars Ulrich, depicts Lady Justice bound in ropes, being pulled by them to the point of breaking, with dollar bills piled upon her scales. The album title is derived from the last four words of the American Pledge of Allegiance. Three of its songs were released as singles: “Harvester of Sorrow”, “Eye of the Beholder”, and “One”; the title track was released as a promotional single.

…And Justice for All was acclaimed by music critics for its depth and complexity, although its dry mix and nearly inaudible bass guitar was criticized. It was included in The Village Voice‘s annual Pazz & Jop critics’ poll of the year’s best albums, and was nominated for a Grammy Award in 1989, controversially losing out to Jethro Tull in the ill-fated Best Hard Rock/Metal Performance Vocal or Instrumental category. The single “One” backed the band’s debut music video, and earned Metallica their first Grammy Award in 1990 (and the first ever in the Best Metal Performance category). It was successful in the United States, peaking at number six on the Billboard 200, and was certified 8× platinum by the Recording Industry Association of America (RIAA) in 2003 for shipping eight million copies in the U.S.

Join Waitlist We will inform you when the product arrives back in stock. Please leave your valid email address below.
SKU: 200232 Categories: Metal, New Records Tag: Thrash Metal