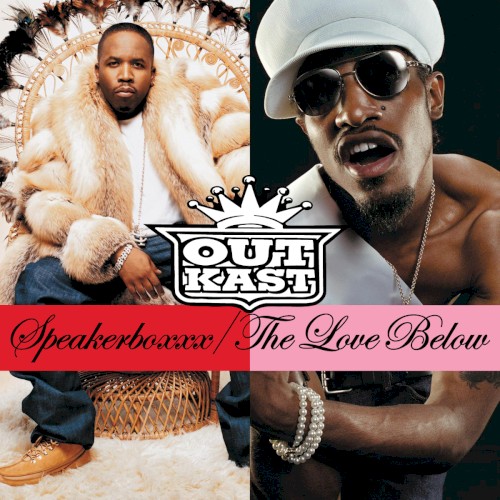 Outkast – Speakerboxxx / The Love Below

Speakerboxxx/The Love Below is the fifth studio album by American hip hop duo Outkast. It was released on September 23, 2003, by Arista Records. Issued as a double album, its length of over two hours is spread across solo albums from both of the group’s members. Big Boi’s Speakerboxxx is a Southern hip hop album with a P-Funk influence, while André 3000’s The Love Below features psychedelic, pop, funk, electro, and jazz styles.

Speakerboxxx/The Love Below was supported with the hit singles “Hey Ya!” and “The Way You Move”, which both reached number one on the US Billboard Hot 100, and the top-ten hit “Roses”. The album debuted at number one on the Billboard 200 with sales of 510,000 copies in its first week. It eventually amassed a total of seven non-consecutive weeks at the top of the chart and 24 weeks in the Top 10. It has been certified diamond and 11 times platinum by the RIAA (each disc in the double album counted as a separate unit for certification). As of March 2012, it has sold 5.7 million units in the United States.

Speakerboxxx/The Love Below received widespread acclaim from music critics, who praised the consistency of Big Boi’s Speakerboxxx and the eclectic musical style of André 3000’s The Love Below. It topped The Village Voice‘s Pazz & Jop critics poll, and won Album of the Year and Best Rap Album at the 46th Grammy Awards, while “Hey Ya!” won Best Urban/Alternative Performance.