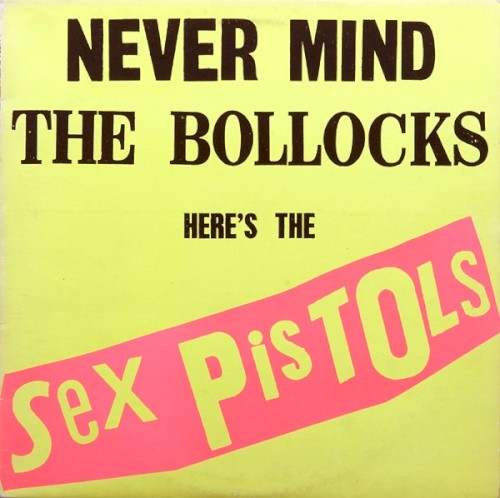 Never Mind the Bollocks, Here’s the Sex Pistols is the only studio album by English punk rock band the Sex Pistols, released on 28 October 1977 by Virgin Records in the UK and on 11 November 1977 by Warner Bros. Records in the US. The album has influenced many bands and musicians, and the industry in general. In particular, the album’s raw energy, and Johnny Rotten’s sneering delivery and “half-singing,” are often considered game-changing. It is frequently listed as the most influential punk album, and one of the most important and best albums of all time.

The band’s internal relationships were always volatile, and the lineup saw changes during the recording of the album. Original bass guitarist Glen Matlock left the band early in the recording process, and while he is credited as a co-writer on all but two of the tracks, he only performed bass and backing vocals on one track, “Anarchy in the U.K.” Recording sessions continued with a new bass player, Sid Vicious, who is credited on two of the songs the band wrote after he joined. While Vicious’s bass playing appeared on two tracks, his lack of skill on the instrument meant that many of the tracks were recorded with guitarist Steve Jones playing bass instead. Drummer Paul Cook and singer Johnny Rotten appear on every track. The various recording sessions were led alternately by Chris Thomas or Bill Price, and sometimes both together, but as the songs on the final albums often combined mixes from different sessions, or were poorly documented who was present in the recording booth at the time, each song is jointly credited to both producers.

By the time of its release, the Sex Pistols were already controversial, having spoken profanity on live TV, been fired from two record labels, and been banned from playing live in some parts of Britain. The album title added to that controversy, with some people finding the word “bollocks” offensive. Many record stores refused to carry it and some record charts refused to list its title, showing just a blank space instead.

Due in part to its notoriety, and in spite of many sales bans at major retailers, the album debuted at number one on the UK Album Charts. It achieved advance orders of 125,000 copies after a week of its release and went gold only a few weeks later, on 17 November. It remained a best-seller for nearly a year, spending 48 weeks in the top 75. The album has also been certified platinum by the RIAA. It has seen several reissues, the latest in 2017.

In 1987, Rolling Stone magazine named the album the second best of the previous 20 years, behind only the Beatles’ Sgt. Pepper’s Lonely Hearts Club Band. The same magazine ranked it number 80 on their list of 500 greatest albums of all time in 2020. In 2006, it was chosen by Time magazine as one of the 100 greatest albums ever.

Join Waitlist We will inform you when the product arrives back in stock. Please leave your valid email address below.
SKU: 200337 Categories: New Records, Punk, Rock Tag: punk rock