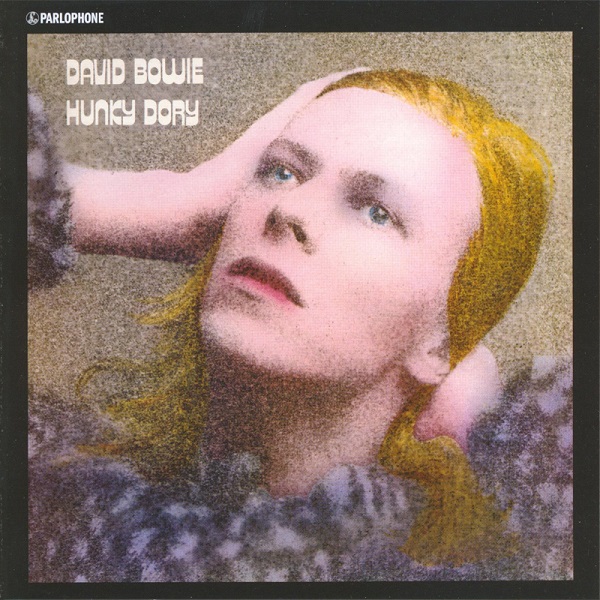 Hunky Dory is the fourth studio album by English musician David Bowie, released on 17 December 1971 by RCA Records. Following the release of his 1970 album, The Man Who Sold the World, Bowie took time off from recording and touring. He settled down to write new songs, composing on piano rather than guitar as on earlier tracks. Following a tour of the United States, Bowie assembled a new backing band consisting of guitarist Mick Ronson, bassist Trevor Bolder and drummer Mick Woodmansey, and began to record a new album in mid-1971 at Trident Studios in London. Future Yes member Rick Wakeman contributed on piano. Bowie co-produced the album with Ken Scott, who had engineered Bowie’s previous two records.

Compared to the guitar-driven hard rock sound of The Man Who Sold the World, Bowie opted for a warmer, more melodic piano-based pop rock and art pop style on Hunky Dory. His lyrical concerns on the record range from the compulsive nature of artistic reinvention on “Changes”, to occultism and Nietzschean philosophy on “Oh! You Pretty Things” and “Quicksand”; several songs make cultural and literary references. He was also inspired by his stateside tour to write songs dedicated to three American icons: Andy Warhol, Bob Dylan and Lou Reed. The song “Kooks” was dedicated to Bowie’s newborn son Duncan. The album’s cover artwork, photographed in monochrome and subsequently recoloured, features Bowie in a pose inspired by actresses of the Hollywood Golden Age.

Upon release, Hunky Dory and its lead single “Changes” received little promotion from RCA who were wary that Bowie would transform his image shortly. Thus, despite very positive reviews from the British and American music press, the album initially sold poorly and failed to chart. It was only after the commercial breakthrough of Bowie’s 1972 follow-up album The Rise and Fall of Ziggy Stardust and the Spiders from Mars that Hunky Dory itself became a commercial success, peaking at number three on the UK Albums Chart. Retrospectively, Hunky Dory has been critically acclaimed as one of Bowie’s best works, and features on several lists of the greatest albums of all time. Within the context of his career, it is considered to be the album where “Bowie starts to become Bowie”, definitively discovering his voice and style.