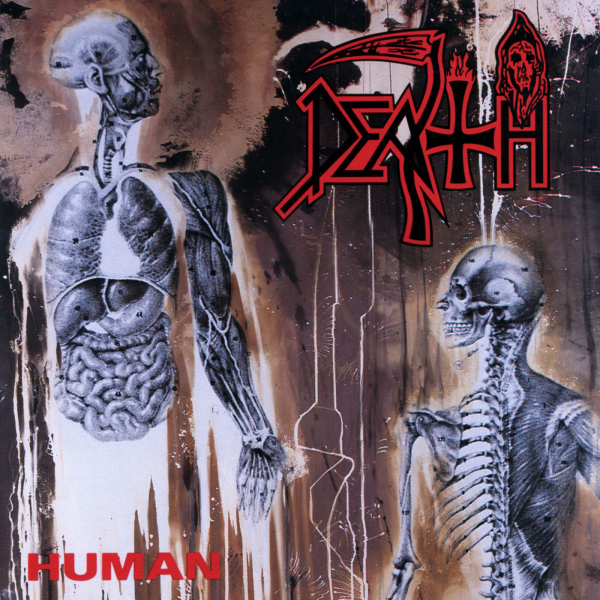 Human is the fourth studio album by American death metal band Death, released on October 22, 1991, by Relativity Records. The album marked the beginning of a major stylistic change for Death, being more technically complex and progressive than the band’s previous efforts. The lyrics are more introspective when compared to the gore-based lyrics of Scream Bloody Gore and Leprosy or the social commentary on Spiritual Healing. This new style would continue to evolve on all following Death albums. This is the only album to feature Cynic members Paul Masvidal on guitars and Sean Reinert on drums, both only 20 at that time, and the first to feature bassist Steve DiGiorgio.

Bass player Steve DiGiorgio left after the recording of this album (though he would later return to record Individual Thought Patterns). He was replaced by Scott Carino, who toured with the band in 1991 and 1992. Carino also recorded additional bass overdub on “Cosmic Sea” after a couple of issues were discovered during the mixing stage. The rest of the song (including the bass solo) was recorded by DiGiorgio.

In 2011, Relapse Records and Perseverance Holdings Ltd. re-issued the album to commemorate the 20th anniversary of the original release. This edition was remixed by Jim Morris of Morrisound Recording Studios, includes bonus tracks, and was authorized by Schuldiner intellectual property lawyer Eric Greif. The reissue of Human was remixed, as Sony had lost the master tapes of Scott Burns’ original mixes.

Human was released to critical acclaim from music publications and is seen as a pivotal release in the development of the technical death metal subgenre and on extreme metal in general. In 2017, Rolling Stone magazine placed the album as the 70th greatest metal album of all time.