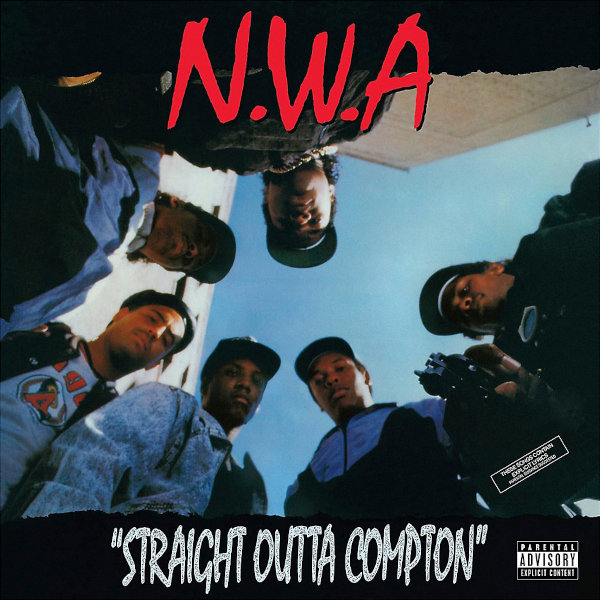 Straight Outta Compton is the debut studio album by rap group N.W.A, which, led by Eazy-E, formed in Los Angeles County’s City of Compton in early 1987. Released by his label, Ruthless Records, on August 8, 1988, the album was produced by N.W.A members Dr. Dre, DJ Yella, and Arabian Prince, with lyrics written by N.W.A members Ice Cube and MC Ren along with Ruthless rapper The D.O.C. Not merely depicting Compton’s street violence, the lyrics repeatedly threaten to lead it by attacking peers and even police. The track “Fuck tha Police” drew an FBI agent’s warning letter, which aided N.W.A’s notoriety, N.W.A calling itself “the world’s most dangerous group.”

In July 1989, despite its scarce radio play beyond the Los Angeles area, Straight Outta Compton received gangsta rap’s first platinum certification, one million copies sold by then. That year, the album peaked at #9 on Billboard‘s Top R&B/Hip-Hop Albums chart, and at #37 on the popular albums chart, the Billboard 200. Receiving media spotlight, N.W.A’s example triggered the rap genre’s movement toward hardcore, gangsta rap. As the 1990s closed, if largely through N.W.A’s own splintering—yielding successful solo music careers and franchises for Ice Cube and for Dr. Dre—the ripple effects had reshaped rap, R&B, and popular music, influencing popular culture.

In 2016, it became the first rap album inducted into the Grammy Hall of Fame. The next year, the Library of Congress enshrined Straight Outta Compton in the National Recording Registry.