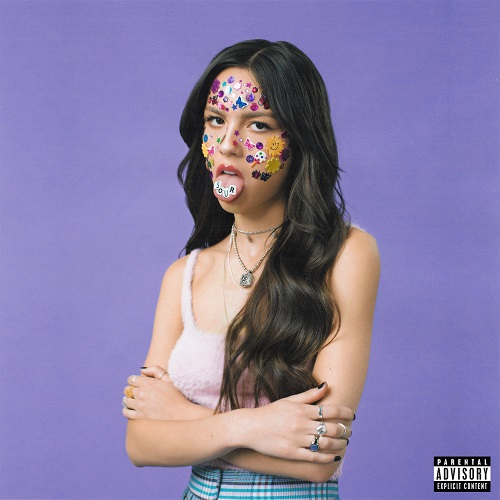 Sour (stylized in all caps) is the debut studio album by American singer-songwriter and actress Olivia Rodrigo. It was released on May 21, 2021, via Geffen Records. The album was written by Rodrigo and her producer Dan Nigro. Originally planned as an EP, Rodrigo expanded Sour into a full-length album following the viral success of her debut single, “Drivers License”.

Influenced by Rodrigo’s favorite genres and singer-songwriters, Sour is primarily a pop record that spans from energetic pop punk songs to bedroom pop ballads. Its subject matter centers on adolescence, failed romance, and heartache. She said the album explores her perils and discoveries as a 17-year-old, with its title referring to the “sour” emotions young people experience but are often criticized for, such as anger, jealousy, and unhappiness.

Three singles preceded Sour‘s release, all of which entered the top three of the US Billboard Hot 100. The lead single, “Drivers License”, topped the chart and propelled Rodrigo to mainstream prominence. It was followed by “Deja Vu”, which peaked at number 3, and “Good 4 U”, the album’s second chart-topper. It made Rodrigo the first artist in history to debut their first three singles in the top 10 of the Hot 100, and Sour the first debut album in history to spawn two number-one debuts on the chart. The album broke the global Spotify record for the biggest opening week for an album by a female artist. It topped the charts in several countries, including the US Billboard 200. “Traitor”, prior to becoming the fourth single, landed at number nine on the Hot 100 as the fourth top-10 song from the album. Sour was one of the best-selling albums of 2021.

Sour received widespread acclaim upon release, with it being regarded as a solid debut album, underscoring Rodrigo’s realistic lyrics and appeal to Generation Z. Various publications listed it among the best albums of 2021, including Billboard and Rolling Stone that placed the album at number one on their year-end rankings. At the 64th Annual Grammy Awards, Sour and “Drivers License” won Best Pop Vocal Album and Pop Solo Performance, respectively; Rodrigo won Best New Artist as well. A YouTube concert film and a Disney+ documentary, titled Sour Prom and Driving Home 2 U respectively, supplement the album. Rodrigo embarked on the Sour Tour, her first headlining concert tour, on April 5, 2022.