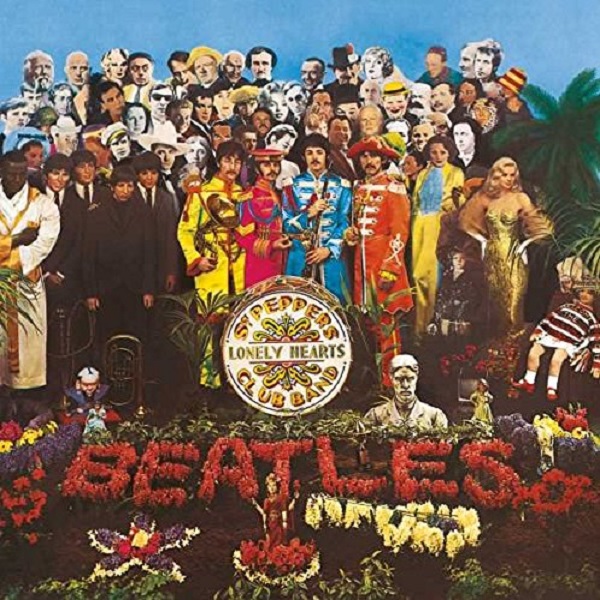 Sgt. Pepper’s Lonely Hearts Club Band is the eighth studio album by the English rock band the Beatles. Released on 26 May 1967, it spent 27 weeks at number one on the Record Retailer chart in the United Kingdom and 15 weeks at number one on the Billboard Top LPs chart in the United States. It was lauded by critics for its innovations in songwriting, production and graphic design, for bridging a cultural divide between popular music and high art, and for reflecting the interests of contemporary youth and the counterculture. Its release was a defining moment in 1960s pop culture, heralding the Summer of Love, while the album’s reception achieved full cultural legitimisation for pop music and recognition for the medium as a genuine art form.

At the end of August 1966, the Beatles permanently retired from touring and pursued individual interests for the next three months. During a return flight to London in November, Paul McCartney had an idea for a song involving an Edwardian military band that formed the impetus of the Sgt. Pepper concept. Sessions began on 24 November at EMI Studios with compositions inspired by the Beatles’ youth, but after pressure from EMI, the songs “Strawberry Fields Forever” and “Penny Lane” were released as a double A-side single in February 1967 and left off the LP.

The album was loosely conceptualised as a performance by the fictional Sgt. Pepper band, an idea that was conceived after recording the title track. A key work of British psychedelia, it incorporates a range of stylistic influences, including vaudeville, circus, music hall, avant-garde, and Western and Indian classical music. The band continued the technological experimentation marked by their previous album, Revolver, this time without an absolute deadline for completion. With producer George Martin and engineer Geoff Emerick, the group coloured much of the recordings with sound effects and tape manipulation, as exemplified on “Lucy in the Sky with Diamonds”, “Being for the Benefit of Mr. Kite!” and “A Day in the Life”. Recording was completed on 21 April. The cover, which depicts the Beatles posing in front of a tableau of celebrities and historical figures, was designed by the pop artists Peter Blake and Jann Haworth.

Sgt. Pepper is regarded by musicologists as an early concept album that advanced the roles of sound composition, extended form, psychedelic imagery, record sleeves, and the producer in popular music. The album had an immediate cross-generational impact and was associated with numerous touchstones of the era’s youth culture, such as fashion, drugs, mysticism, and a sense of optimism and empowerment. It is considered one of the first art rock LPs, a progenitor to progressive rock, and the start of the album era. In 1968, it won four Grammy Awards, including Album of the Year, the first rock LP to receive this honour; in 2003 it was inducted into the National Recording Registry by the Library of Congress. It has topped several critics’ and listeners’ polls for the best album of all time, including those published by Rolling Stone magazine and in the book All Time Top 1000 Albums, and the UK’s “Music of the Millennium” poll. It remains one of the best-selling albums of all time and was still, in 2018, the UK’s best-selling studio album. More than 32 million copies had been sold worldwide as of 2011. A remixed and expanded edition of the album was released in 2017.