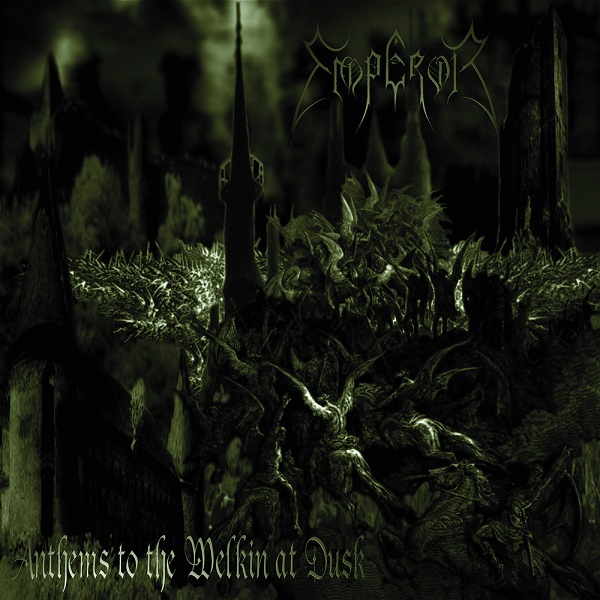 Emperor – Anthems to the Welkin at Dusk

Anthems to the Welkin at Dusk is the second studio album by Norwegian black metal band Emperor. It was released on 8 July 1997 through Candlelight Records and Century Black.

According to Steve Huey from AllMusic, the album is a “magnificently-conceived and executed opus that fulfills all of Emperor’s promise and ambition. The biggest difference from its predecessor [being] the crisper, clearer production, which allows details in the arrangements to emerge far more readily.”

He added that there’s greater use of classical flourishes, greater variety in Ihsahn’s vocals, more audible guitar interplay between Ihsahn and Samoth and more complex and melodic keyboard work. “It definitely builds on the groundwork laid by extreme metal pioneers Celtic Frost and Bathory: the former with its restless experimentalism, and the latter with its determination to create something quintessentially Scandinavian.”

Finally, he concluded: “Anthems to the Welkin at Dusk cemented Emperor’s reputation as black metal’s greatest band, and Ihsahn as its foremost musical visionary; it also firmly established black metal as an art form that wasn’t going away any time soon, and opened up a wide range of creative possibilities to the more progressive, eccentric wing of the genre. In the Nightside Eclipse might epitomize black metal better than any other album, but divorced from outside context, Anthems to the Welkin at Dusk is black metal’s greatest stand-alone creative achievement.”